Tencent is a company that defies categorisation. It is so many things all at once – gaming, social network, fintech, media and cloud. At almost USD 700bn market capitalisation, it is the biggest company in China and one of the biggest companies globally. But I think it still has a very long growth runway ahead and likely to offer an excellent risk-adjusted return.

On a high level, my favourable outlook for Tencent is anchored on four parts:

1) WeChat is the equivalent of a modern-day digital utility in the sense that it is almost irreplaceable because it is both a utility app and a social networking app. The combination of utility-driven high switching cost and network effect creates an almost impregnable moat for the foreseeable future. It is currently under-monetised relative to the value created for its users. More importantly, WeChat continues to create new value for its users by expanding use cases on WeChat. For the next 5 years, WeChat’s advertising revenue growth rate will accelerate as its eCommerce ecosystems mature.

2) Tencent’s vertically created gaming business enjoys a very long growth runway as the video game is on a multi-decade march of gaining share of the entertainment budget.

4) Tencent has laid the seeds of future growth in Cloud, Fintech and enterprise software

With 1bn of users, WeChat has transcended its inception as a messaging app and become a modern-day utility in digital life. People use WeChat to message, socialise, pay, read blogs, buy grocery and play games. In very practical terms, one cannot live life in China without WeChat just like one cannot live life without electricity in the modern era. No other social network, even Facebook, comes close to being as much a utility in people’s daily lives as WeChat does.

This means that WeChat’s risk of disruption by another social network is actually even lower than the like of Facebook and Instagram. In fact, WeChat will become more relevant to people’s lives by providing even more valuable services such as discovering restaurants, local services and financial services (payments, wealth management, personal loans).

Given WeChat’s importance in Chinese people’s lives, it is incredibly under-monetised. Tencent’s ~ RMB 80bn of advertising revenue is actually smaller than Bytedance’s advertising revenue. I think I am safe grounds if I say that advertising dollars follow user time spend. Below is a chart that maps ad spend to time spend. This data is from 3Q 2019 but it is still valid. 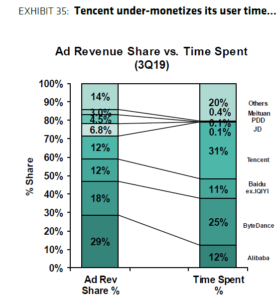 Interestingly, Alibaba has the largest share of the advertising dollar with ~1/3 of the total China online ad spend. Bytedance’s ad revenue also saw a meteoric rise. Both Ali and Bytedance have the most mature and sophisticated monetisation infrastructure. Bytedance’s well-tuned algorithm can deliver unparalleled precision while Ali has the most comprehensive eCommerce marketplace.

Tencent is lacking behind in ad revenue because:

On a high level, I believe the growth of WeChat’s e-commerce ecosystem will drive Tencent’s ad revenue. But why is Tencent able to crack eCommerce this time around? Tencent made a go at eCommerce in 2014 which did not go well. They end up selling their eCommerce business to JD.com. So what has changed?

Since 2014, China’s eCommerce infrastructure has grown significantly where the payment and logistics are becoming APIs that anyone can plug-in and start an online business. A vast ecosystem of service providers such as Youzan and Baozun has surfaced to provide software and operational competences to run an online eCommerce business. Most importantly, Chinese merchants have accepted eCommerce as the default way to do business and the majority have decent know-how when it comes to running an eCommerce business.

So it is in this context that Tencent decides to have another go at eCommerce and this time through WeChat and more specifically WeChat mini program (MP).

Merchants will be able to set up shop using WeChat MP to market and sell their products. WeChat MP has a built-in payment API (WeChat pay), a logistics API link and other useful modules such as live streaming and eCommerce software. This means that WeChat is a closed-loop transaction platform just like Taobao!

And this is VERY important. For a very long time, merchants have advertised on Tencent properties but the transaction is typically completed either on Ali or JD or PDD. As merchants now have the option of directing transaction to WeChat MP, merchants will be able to acquire customers, complete transaction and provide aftersales service within WeChat. This ability to close the transaction within Tencent’s walled garden has two huge implications for its advertising business.

1) Tencent can finally provide a true performance advertising product which means merchants can measure their RoI with incredible precision. We have seen many times that the ability to demonstrate a clear marketing RoI is an excellent way to persuade merchants to shift their advertising budget. Facebook is a good example here.

2) Tencent will be able to collect better data and, with its improved advertising infrastructure, it can finally be able to match its peers in terms of precision and accuracy. Here there is a very fine line to draw between protecting user privacy and advertising efficiency. I trust that Tencent will approach this balance with an abundance of prudence. I think it would be naïve to believe that there is no loss of user privacy but I think it will be moderate.

One of the biggest challenge in terms of growing ad revenue on WeChat has been this: how to show users more ads while not completely destroying their user experience. Just imagine how annoying it would be if you keep seeing ads while messaging your friends. So WeChat has to create a completely independent public domain for commercial activities while keeping the core messaging user experience simple and pleasant within the private domain.

The introduction of WeChat MP and WeChat Video Account solves this problem quite well. But the deliberate separation created by WeChat MP means that discoverability is a big issue for merchants. How can merchants reach users on WeChat if they are only given a very limited opportunity to market themselves? WeChat has come up with two partial solutions. 1) they are trying to make the search within WeChat much more powerful. At the moment WeChat search capability is very limited as it cannot search for content within MPs very well. 2) the creation of a short video product within WeChat, known as WeChat Video Account, where users can watch short videos in a feed style. I suspect this would be an important portal for merchants to acquire users in the future.

In the long term, there is a question about how much activity can WeChat carry within a single app without breaking the user experience? Is WeChat trying to do too much? I think at some point in the future, it will be a big problem for WeChat. But at this point, I think the early evidence suggests that WeChat can support a vibrant commercial community on its app.

Tencent reported that WeChat generated RMB 1.6trn of GMV in 2020 with over 100% YoY growth. It also reported a 400m DAU for WeChat MP. WeChat has 1bn users and let’s assume 50% of them end up buying things on WeChat and assume an ARPU of RMB 10k which is in line with major eCommerce platforms in China. It is not inconceivable that WeChat can do RMB 5trn of GMV by 2025. If we assume a 5% take rate on RMB 5trn GMV, it translates into RMB 250bn of revenue for Tencent which is incremental to its current base of RMB 80bn revenue.