Investment memo: Everyman Media – a cinema that happens to be more like a restaurant

Everyman Media is a boutique cinema operator in the UK which has been heavily impacted by COVID-19. I am buying into Everyman because I think cinema is going to be around for a long time especially the kind of cinema that also happens to be a restaurant. 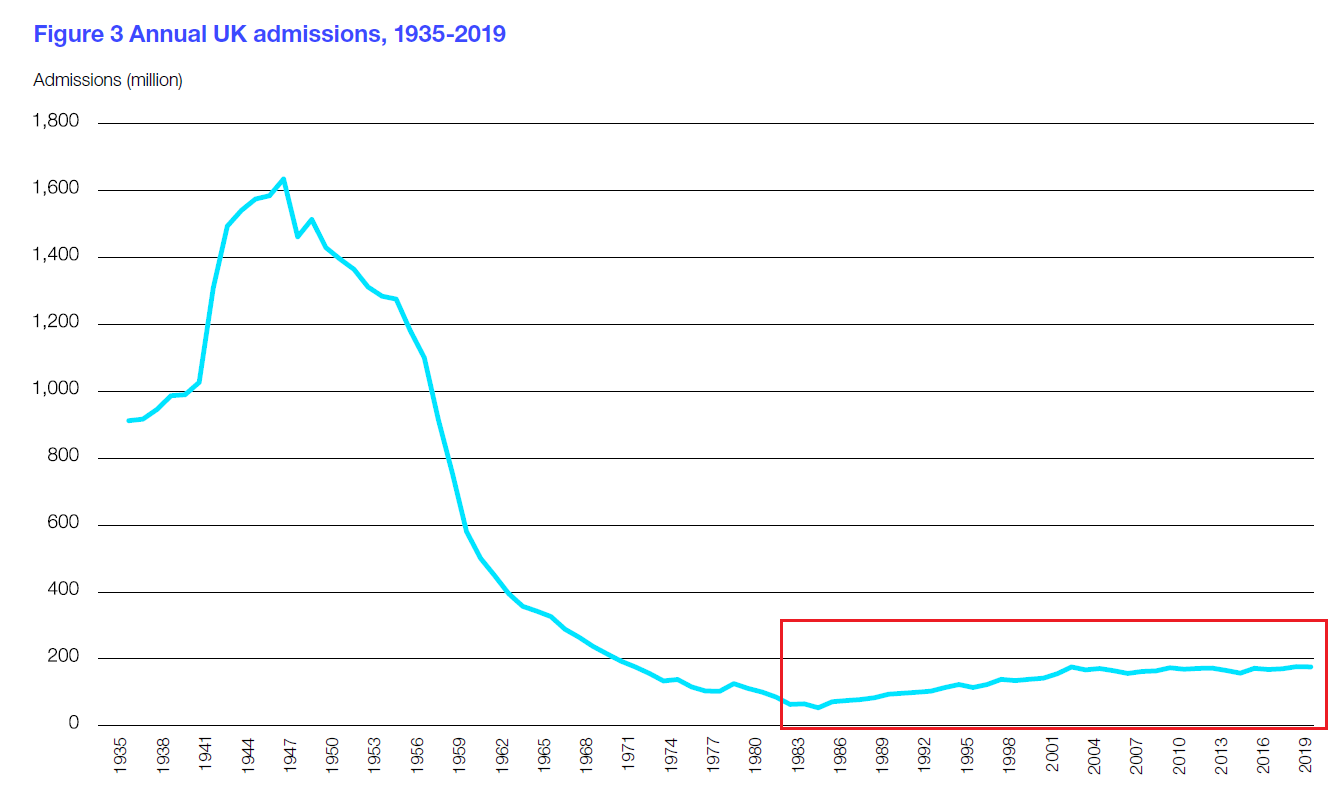 On a high level, UK cinema admissions has been growing since the 1980s despite the advent of TV, DVD, Netflix, video games and smartphones. In 2019, the UK cinema admission is ~176.1m. I believe that cinema has been relatively resilient despite the onslaught of new entertainment formats because it is as much about the physical experience of going to the cinema with your friends as it is about the actual movie itself.

But I am not saying cinema is not under threat from the continued penetration of video-on-demand service providers such as Netflix and Disney. I think on the margin, some cinema-goers might never go to the cinema because they can see the same film in the comfort of their own home post-pandemic. But there will still be a lot of people who visit the cinema for the physical experience.

It is in this context that I think Everyman business would not only recover but continue to thrive in the post-COVID-19 world.

Everyman cinema’s value proposition is to bundle great food, comfortable sofa and movie together. One could say that Everyman is more like a gastropub that happens to have a cinema inside. Everyman’s food and beverage (F&B) spend per head is GPB 7, almost double Cineworld’s GBP 3.5.

Everyman customers are as much looking for a good night out as they are hoping to enjoy a good movie. For an Everyman customer, he/she is less concerned about the choice of the movie on show that night as long as it is not a bad movie and rather he/she is looking to spend some quality time with friends and family. Hence Everyman’s customer should come back as soon as they are allowed to; the same reason why people would eventually return to restaurants.

Using 2019 data, Everyman’s average ticket price is GBP 11.3 which is ~ 34% of Cineworld’s GBP 8.43 and 58% above the industry average of GBP 7.11. Everyman’s average ticket price is higher because they are doing a good on doing less discounting and able to command higher price during weekdays. I believe Everyman targeting a more premium experience helps.

Based on a previous management interview, I have estimated that the company’s average maintenance capex per site is ~GBP 250k per year.

Currently, the company operates 33 cinema sites and I believe they can expand to at least 50 sites in the UK by 2024. This should translate into a revenue of GBP 100m and on a 20% net profit margin, they could earn GBP 20m in 2024. I think given that they would still have room to expand beyond 50 sites, it is reasonable to assign a 15x terminal multiple for a highly cash flow generative business with a reasonable moat surrounding it. This would get to a value of GBP 300m against the current valuation of GBP 120m. 150% upside for 3 years. That feels like a good risk-reward to me.

This business is not without risk since it is relatively easy to copy its business model of small sites + premium service + credible food offering. I do expect competition to come in and erode profitability. And there is not a super long structural growth runway.