Nintendo Investment Update – The End of the Beginning

Nintendo reported, in my view, excellent results for the Fiscal Year (FY) 2021 and it is a real pleasure to be a business owner (and customer) in this fantastic business.

My core investment thesis for Nintendo remains the same: Nintendo Switch is a sustainable gaming platform because it is anchored by Nintendo’s world-class games and supported by a mix of long life-cycle games and new games by both Nintendo and third-party game developers. Nintendo Switch is in a positive feedback loop now where its large install base is attracting more third-party game developers which in turn attract more Switch buyers. If my assumption that the Switch gaming platform would defy the previous console lifecycle of peaking in year 5 and ending in year 7, then I assess Nintendo’s intrinsic value with the following factors: 1) Switch install base, 2) software revenue per install base, and 3) gamer engagement with Switch platform.

Gamers are buying more units of Nintendo Switch and software for the three months ended Mar 2021 (4.72m) versus the same period in 2020 (3.28). This is very impressive because there were no mega game releases such as Animal Crossing in 2021 and yet Switch is still selling very well. It is hard to assess the impact of the pandemic on sales trends.

Anyhow, I think we are safe to assume that the Switch install base could reach 110m by end of 2022.

Software Revenue Per Install Base

Instead of using the industry average of tie-ratio (units of software sales per install base), I prefer to use software revenue per install base which is simply taking total software revenue (a dollar amount) and divide by the total install base. This metric was first introduced by Nintendo CEO, Mr. Shuntaro Furukawa, and he argued that as online membership revenue and in-game item sales increase, it is less effective to use software units to understand the software performance. And I agree with Mr. Shuntaro Furukawa. 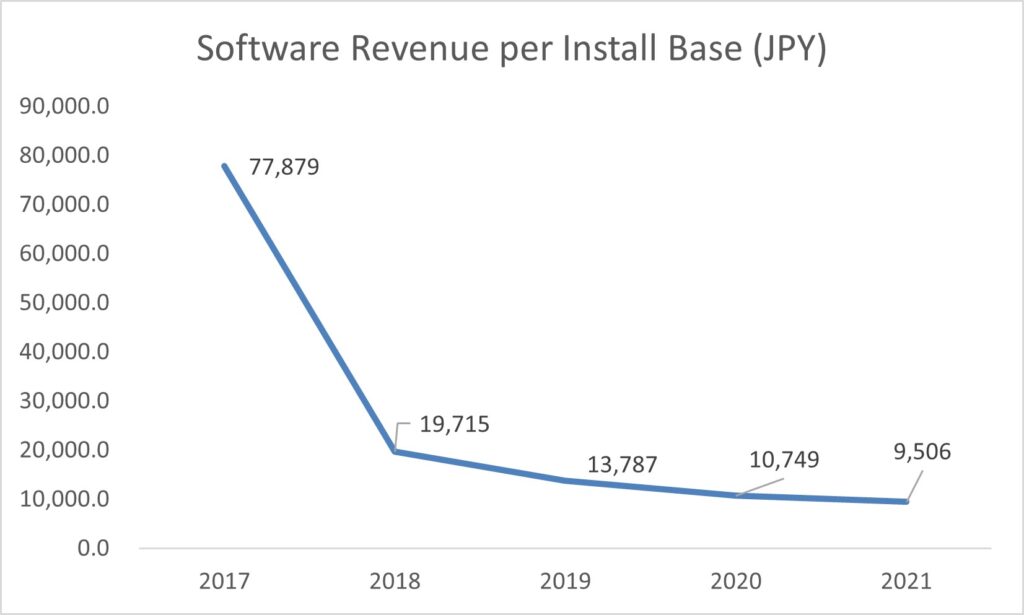 There are quite a few dynamics that impacts the software revenue per install base and I will try to call out a few big ones here:

Again if my thesis is right, then the “recurring” revenue from long lifecycle games, such as Fortnite and Tetris, should form the bedrock of Nintendo’s software revenue. And new games releases’ contribution to total software revenue would be volatile in nature.

Taking the various factors into consideration, I assume that software revenue per install base would continue to decline by 10% in FY 2022 and reach JPY 8555

Gamer engagement with the Switch platform

Healthy gamer engagement is critical to the long-term health of the Switch platform. Ideally, you want gamers to play Switch every day even if they only buy one-off game products such as The Witcher 3. Because as long as gamers are coming to Switch on a regular basis, then there is always a  chance to sell a new game to the gamer.

In the latest result call, Mr. Furukawa said the following on Switch’s active user base:

Previously I wrote that:

For the last 12 months, I see evidence that Nintendo is beginning to understand the importance of live game operations. For example, Nintendo has been continuously providing new content for Animal Crossing and introducing online gameplay to Super Mario Party. With stronger live game operation capabilities, Nintendo will be able to maintain a strong engagement with its gamer base.

And as long as gamer engagement is high, the revenue will follow. 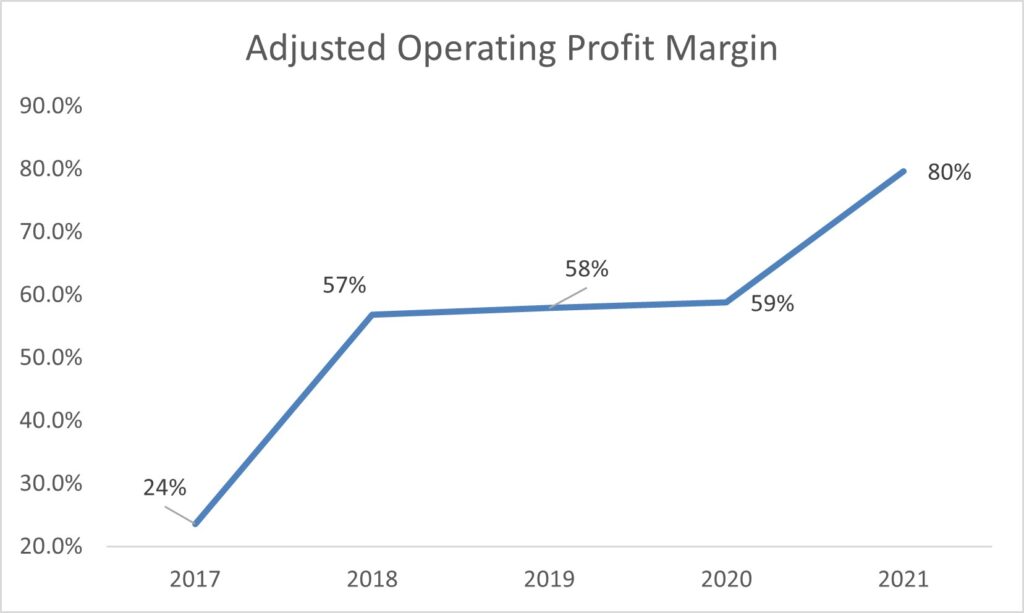 There are a few key drivers for the operating profit margin expansion.

1. The increase in the proportion of total software sales sold through the digital channel (42.9% in FY 2020) has been increasing steadily over the last 5 years. Digital sales carry a much higher margin than offline retail channels because 1) there is no cost to produce physical copy and 2) Nintendo earn the full retail price instead of the wholesale price. 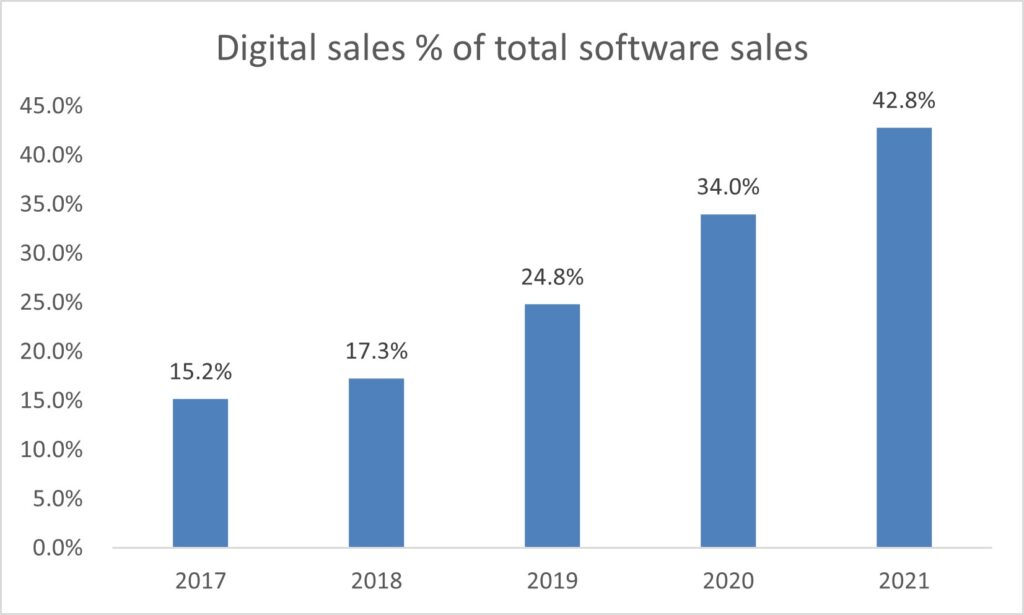 Mr. Furukawa gave us an update on the purchasing behavior of gamers which gave me confidence that digital sales % can only increase from here albeit more slowly from here:

“And in terms of digital sales, consumers who purchased hardware during the year-end holiday season are relatively inclined to purchase their next game digitally, leading to a tendency for the ratio of digital sales in the fourth quarter to be higher than the third quarter. But even so, the fourth-quarter digital sales in the previous fiscal year were comparable to those in the third quarter, which indicates that purchasing software digitally has become quite widespread as an option for our consumers.”

Also as the “recurring” revenue from online membership, in-game items sales, and DLC sales should also help to grow the digital sales percentage.

2. Another driver for operating margin expansion has been the growth of third-party games on the Switch platform. 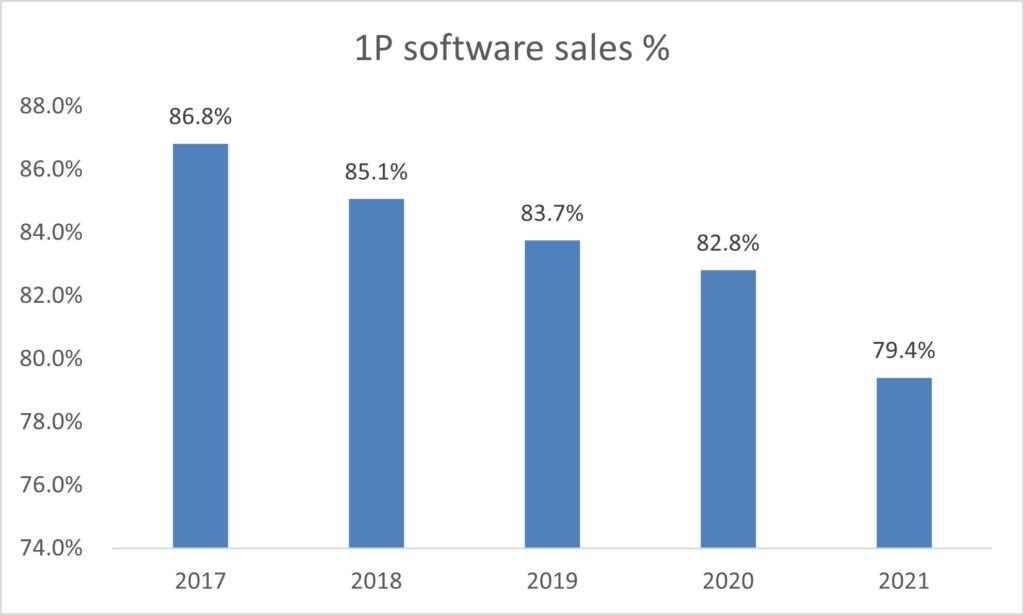 This indicates a very healthy 3rd party developer ecosystem on Switch. I think Switch has a lot of work to do in terms of improving the discoverability of games on Switch.

I assume that they would need to incur more R&D spend on both hardware and software and hence I assume a 70% adjusted operating margin in 2022.

Taking the above factors together, we have:

If we look out 3 years to 2024, I assume that Switch install base could reach 140m and software sales only drop another 10% over the next 3 years, JPY 7700. Assuming that operating margin would remain at 75% as the higher incremental margin is reinvested back into the business. Then I arrive at JPY 690bn.

Now I could be way too optimistic in estimation. There are still many risks – cloud gaming could commoditize hardware, Nintendo launching another weird console just like they did with Wii U, iPad becoming a stronger console platform. And most importantly, Nintendo fails to fully embrace gaming as a service. On balance, I think Nintendo’s risk-reward feels very good here to justify the high portfolio weight.