Capital Returns is an excellent collection of investor letters and essays by Marathon Asset Management, edited by Edward Chancellor and originally intended to be distributed within the firm.

Although it looks like many of Marathon’s calls were prescient, there is definitely some selection bias involved in the picking of the essays (this is acknowledged by Chancellor).

Because I am a huge fan of the essays, I will be posting a large summary in three parts on the blog. We will finish with a more condensed ‘main takeaways’. 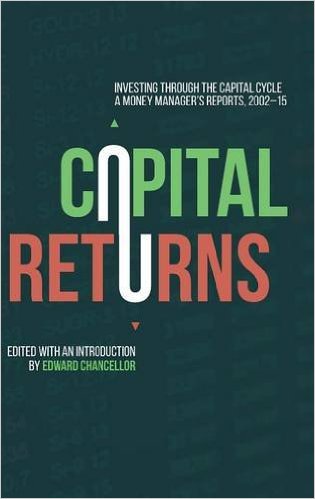 What is capital cycle analysis

Capital is attracted to high-return sectors of the economy and leaves when returns become dismal. This process is never static, always dynamic. From the economy’s point of view, this process is Schumpeterian, flushing the misallocated capital.

Capital cycle analysis is about how competitive advantages change over time from the investor’s perspective.

Larger firm investment is followed by lower returns. This mean reversion is not only due to animal spirits, companies that earn more than their cost of capital expand their capital base, hence increase supply in their industry, while those that fail behave in an opposite fashion.

Corporate investment rates is also a negative predictor for corporate profitability in national aggregates. The US has had very low rates of reinvestment after the mal-investment of pre 2007 was revealed, and is subsequently earning very high profit margins.

Now, here, you see, it takes all the running you can do, to keep in the same place. – The Red Queen in Alice in Wonderland (TC’s analogy to Berkshire’s textile capex in reality versus )

Fundamentals of analyzing the cycle

“After 10 years on the (CEO) job, a CEO that retains 10% of earnings will typically have been responsible for 60% of the capital invested in the business”. – Warren Buffett

The Story of Cod

For two centuries, the pinch-point between abundance of cod on sea and scarcity on land were the small ports that processed cod. When the industry scaled to transatlantic trade, that pinch-point became the large market of Boston. A triangular route emerged where ships transported New England cod to Europe, subsequently took African slaves to the Carribean sugar plantations, and finally brought Carribean liquor to Boston.

Boston flourished until technology catched up:

Overfishing became commonplace as the new owners had to bear high fixed costs to buy these new technologies. After ports, markets and processors of cod, and consumers, became main beneficiaries of the trade.

The questions for investors is which company will become the equivalent of the Boston fishing market?

If supply outpaces demand growth, profits suffer. Hence it is possible that sectors with high demand growth bring little or no benefit to investors as capital floods in (e.g. airlines, semiconductors, mobile phones). This is also true on the country level, with negative correlations of subsequent equity returns and country GDP growth. Public equity returns in China are a perfect example.

Rather, investors should focus on supply. The starting point of company analysis should be prospective supply, not demand.

High moat “quality” companies that revert slower to mediocre ROIC’s than the market implies do so because competing capital inflow is somehow restricted.

A “growth” label company typically gets a “value” label after excess capital flows into its sector.

Long term investing works because there is less competition for really valuable bits of information.

Low turnover reduces friction costs and fewer decisions leading to hopefully fewer mistakes. The real advantage to this approach, in our opinion, comes from asking more valuable questions. The short-term investor asks questions in the hope of clues to near-term outcomes. The value of this short-term oriented data is modest at best, and to build a long term significant track record, this investor needs to pull off this trick many thousands of times to exploit marginal opportunities sustainably. The competition is ferocious.

An example is Colgate’s line extension advertising investment in the ‘80s. It created a huge amount of value eventually but the focus at the time was short-term earnings drag. Apparently even today no investor questions have been raised to Colgate’s management about its large marketing spend, except for Marathon’s.

In his University of California talk, Munger asked students when demand goes up if you raise prices. Students responded with certain luxury goods.

What Munger was waiting for in fact were goods sold through friendly middlemen. Geberit (also covered in Quality Investing book, extensively uses plumbers in their push – pull strategy: plumbers pull their product to where it was pushed, i.e. wholesalers. Geberit invests a lot in free plumber training so that it becomes more time efficient for them to choose Geberit. Also, Geberit invests a lot in innovation and quality of the product, as the plumber gets a commission as a percentage of sales and hence does not care about the price (indeed, a plumber rather sells a high priced product). Rather, the plumber thinks about factors such as hassle-free installation, durability and quality to protect his own reputation. By investing heavily in training for plumbers, innovation, and quality, Geberit is able to raise prices disproportionately.

The agent’s interest is typically quality, safety, reliability, availability. Cost to the customer is ideally not a concern for the agent (to the contrary, if he earns a personal commission).

Marathon has been a long term investor in Priceline and Amazon, and stresses how investors back in the 2003-2006 days were stressing short term margins instead of focusing on execution of the long term stated plans of the founders.

Commentators are focusing on mean reversion of elevated aggregate corporate profitability. Marathon stresses that it is more productive for bottom-up investors not investing in indices to focus on specific sectors and firm capital cycles (or lack thereof, in case of sustainable competitive advantages).

The Philadelphia semiconductor index has underperformed the Nasdaq since ’94 inception by 200 basis points p.a. with greater volatility.

Some firms, such as Analog Devices, have performed well over the long term. Analog semiconductors bridge the gap between the real world and the digital world, e.g. sensors in airbags, microphones in mobile phones, temperature sensors etc. According to Marathon, sustainable competitive advantages exist in this niche of the semi sectors, because capturing what is happening in the real world is harder.

The human capital component is hard to replicate because engineering talent deepens with experience. The design process is more trial and error. To become an expert in analog devices requires many years and the tenure of the average engineer at Analog devices is 20 years. Lastly, each analog company’s process technology is quite distinct. [..] Thus, it is difficult for an engineer to be poached by another analog company without his productivity being significantly impaired. Lastly supply of new engineers is more constrained for the analog niche as new graduates are more likely to pursue the digital semi route.

This is all compounded by the fact that analog devices have more diverse end markets. While the overall market is relatively fragmented, market segments is much more consolidated.

Pricing power is aided by the fact that analog chips play a very important role but represent only a small portion of the total cost of devices. Moreover, once an analog chip (e.g. sensor) has been designed specifically for a product, switching costs are high as the whole production process has to be revised. This makes revenues more recurring as well over the product life-cycle.

Finally, the analog production process is less standardized than most hardware, and thus less vulnerable to obsolescence from Moore’s law. More than a third of Analog Devices come from products which are more than ten years old.