This post will not be about the Corona shock itself. Rather forward looking & on knock-on effects.

Summary on the shock

I do believe this virus is in the sweet spot of characteristics between % mortality and other characteristics like incubation period to cause more simultaneous deaths (not anything like steady flow of traffic deaths) than ever before in absolute casualty cases. On the other hand, it is a mathematical certainty that consumer society will resume +- normal in a few months as the % of recovered population goes up and makes the viral reproduction multiple (R0) plummet. In simple terms: viral reproduction ability plummets as recovered population can’t infect others, nor can others infect recovered cases except for some exceptions (see most rudimentary math model in epidemics SIR model).

I personally haven’t deployed any cash/gold into stocks this week (though I do believe I should be almost always 90-100% invested in stocks as a stock picker).

At this point I’m inclined to buy the low debt names in sectors that were already cheap before this shock started.

High cash yields with bond-like robustness to a recession are key.

Energy is a good example.

Huge advances in shale technology were pitched by Wall Street as a reason to pour money in shale. Ironically, technological progress was the very enemy of shale investors (stocks are down ~90%) .

Not unlike Buffett’s Berkshire textile operations, technological advances lead competing producers to pour money and invest in new technologies simultaneously. A decision that seems rational when a consultant presents it in isolation (invest 1000$ in this machine that saves you 700$ annually per factory, payback time = 1.4 years) is not rational when every competitor is doing the same. The end result is more efficient production for all producers and hence price deflation. The only winners are consumers. This is why Buffett stopped investing in the ever-efficient textile business. 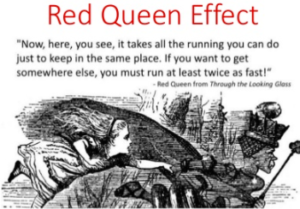 A widely known consequence is that this amazing technological progress (machine learning is still improving fracking efficiency) has led the US shale producers to be the new global “swing producer” of oil. Shale acts as a ceiling on the oil price as the global supply cost curve has flattened. Technological efficiencies cause the absolute cost difference in developing a cheap Permian barrel and say more difficult Bakken barrel to tighten. India needs an extra barrel? Oil price barely needs to go up to drill more. No one talks about peak oil these days.

What is not widely understood right now – with energy equities at a multi-decade record low % of total market cap – is that the corollary is also true.

Since 2015, the growth of shale production has been astonishing. Today, shale oil satisfies 7% of total global consumption (the latter is ~100m barrels per day).

In the biggest recession of our lifetime, oil demand declined only a few million barrels, (low single digit %), before it resumed its upward march: 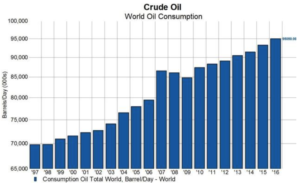 Then why was the price move so abrupt in 2009? Existing developed production does not adjust much to lower prices as the cost to develop the field is already stranded.

The marginal cost of producing developed barrels that are already flowing is much lower than the all-in cost (incl. investment cost to develop) . In the past, oil prices had to fall towards the marginal cost of developed barrels to adjust production downward, as the geological decline rates of existing reserves were so low. In the past, price had to move a lot to balance supply with small changes in demand.

In the next recession, existing shale oil production will decline immediately by virtue of huge decline rates on existing production (i.e. mother earth). New shale development will grind to a screeching halt as the oil price moves down a little, below the all-in cost of development. By the way, Wall Street has already soured on shale producers as they have proven to be cash burning machines doomed by the Red Queen effect described above + a recession will completely halt the easy money flow for new development + we are seeing this already: the rig count is already down more than 20% (incl all types of development incl gulf of mexico).

In other words, my believe is that oil prices can’t move much down in the next recession as the cost curve thanks to technological progress has flattened, and the swing producer adjusts immediately to lower oil prices thanks to mother earth’s decline rate.

Oil equities have been punished indiscriminately last week, from a low valuation base.

I do believe the risk reward of investing in E&P’s with cash flow generative conventional oil reserves in non-liberal democracies (South East Asia, Africa, Russia, perhaps US) is better.

In short, I believe political risk will be fine in a recession.

And while society can legitimately choose to curb carbon emissions trough different mechanisms on the demand side, it is a fact that society would screech to a halt when oil production stops today. Stopping O&G production is the most efficient way to propel us back to the stone ages.

Personally, I find it distasteful to look down on investors that have risked real capital (indeed lost much in the last decade) in a sector that risks capital and livelihoods to produce the energy that society (still) needs (and takes) right now. Cheap energy has always been a fundamental driver to improving quality of life for the poorest.

What am I looking at?

Even the lowest cost shale producers have low profit margins, making them speculative.

On to more conventional producers:

The crucial factor of course is capital allocation in the commodity space.

Any recommendations on good managements in this space are much appreciated!